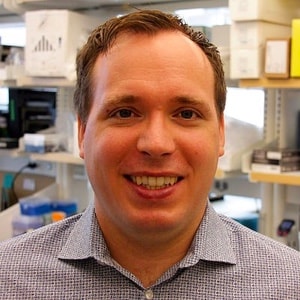 Reinhard Hinterleitner, Assistant Professor
Department of Immunology at the University of Pittsburgh School of Medicine

This project will study how specific gut commensal microbes promote oral tolerance and protect from loss of oral tolerance which will provide the basis for microbe-based therapies to prevent the development food allergies and celiac disease. 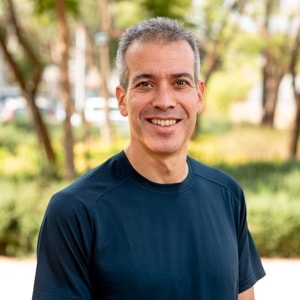 Deciphering human antibody repertoires against the microbiome in health and disease

Despite significant progress in understanding microbiota driven immunity in animal models, it is vastly unknown which antibody repertoires humans possess and how these responses affect health and disease. This project will apply a novel and broad approach to identify which epitopes of the microbiota are immunogenic and result in antibody generation.

Multidisciplinary immunology will be combined with machine learning methods to screen rationally designed libraries of 244,000 epitopes. Leveraging phage display and robotic automation, the interplay of individual antibody repertoires with clinical parameters and the microbiome will be systematically assessed in 1,000 individuals. These results alone will represent the largest systematic study to date of the interaction of the gut microbiota and the immune response in healthy humans. Furthermore, samples of inflammatory bowel disease (IBD) patients and autoimmune diseases (multiple sclerosis, MS) will be analysed for biomarker discovery, paving the way towards novel therapeutic approaches.

Eran Segal is a Professor at the Department of Computer Science and Applied Mathematics at the Weizmann Institute of Science, heading a lab with a multi-disciplinary team of computational biologists and experimental scientists in the area of Computational and Systems biology. His group has extensive experience in machine learning, computational biology, and analysis of heterogeneous high-throughput genomic data. His research focuses on Microbiome, Nutrition, Genetics, and their effect on health and disease. His aim is to develop personalized medicine based on big data from human cohorts.

Prof. Segal published over 150 publications, and received several awards and honors for his work, including the Overton prize, awarded annually by the International Society for Bioinformatics (ICSB) to one scientist for outstanding accomplishments in computational biology, and the Michael Bruno award. He was recently elected as an EMBO member and as a member of the young Israeli academy of science. 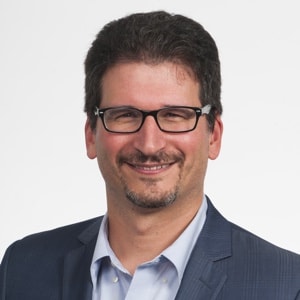 The microbiota impacts the entire body and contributes to both health and disease. Bacteria produce a broad array of biologically active chemicals that have direct impacts on host signalling pathways. These can promote health, as in the case of short-chain fatty acids (SCFAs) promoting mucus production and decreasing inflammation, or they can drive disease as in the case of tri-methylamine-N-oxide (TMAO) and cardiovascular disease. The gut microbiota has been implicated in inflammatory bowel disease (IBD), where dysbiosis is a dominant feature. But, the relationship between dysbiosis and inflammation remains unclear. After nearly twenty years of “omics” based investigation into the microbiota significant progress has been made in identifying the bacteria present in the microbiota, but the function of these bacteria remains largely a mystery.

To address this challenge, Dr Begun's team has developed a discovery pipeline to isolate and characterize secreted bioactives derived from cultured gut bacteria. The pipeline is based on optimized anaerobic growth conditions to culture a wide range of human microbial species. Bioactives produced by these isolates are then screened for pathway specific anti-inflammatory activity using high throughput reporter systems. The team has used this pipeline to successfully identify two NF-?B bioactives which have shown anti-inflammatory activity in pre-clinical animal models. The pipeline is easily adaptable, and this proposal will screen for bioactives that inhibit IL-23 induced STAT3 activity. This pathway has emerged as an effective target in IBD, psoriasis and arthritis, where approved therapeutics are already in use.

The project team will screen its collection of healthy stool bacterial isolates to identify bioactives that can inhibit IL-23. Additionally, it will determine the frequency of strains capable of supressing IL-23 signalling in healthy subjects and compare that with IBD patients. This will allow the team to begin to describe the functional dysbiosis in IBD patients.

A/Prof Jakob Begun obtained his MD and PhD in genetics at Harvard Medical School. His advanced training in Gastroenterology and Inflammatory Bowel Disease (IBD) was at Massachusetts General Hospital (MGH) where he developed a keen interest in the microbiome – immune system interactions. He is the director of IBD at the Mater Hospital Brisbane and IBD Group leader at the Mater Research Institute – University of Queensland. He runs a basic and translational laboratory investigating the interaction between innate immune functions of the gut and the microbial community. He also performs clinical research on the use of intestinal ultrasound in IBD, real world effectiveness of therapeutics, and identifying barriers of care for adolescents and young adults with IBD at the Mater Young Adult Health Centre. He is the chair of the Gastroenterological Society of Australia IBD Faculty. 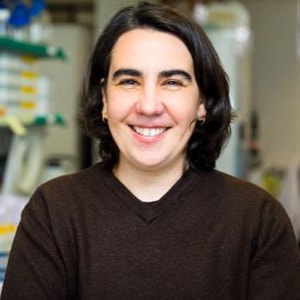 Microbiota diversity is a key modulator of host health: a diverse gut microbiome is indicative of health and a microbiome exhibiting low diversity is typically associated with disease. How such microbiome diversity emerges and is maintained over the life of an individual host is one of the great mysteries that this project seeks to address.

Recent analysis of the Human Microbiome Project data suggests that within-host evolution of microbiota species can occur in the human gut over months or years. However, the limited sampling, difficulties with analyzing short read sequence data and lack of control of the initial conditions of strain colonization, makes it extraordinarily difficult to quantify rates of evolution. Furthermore, possible migration of strains from the environment raises uncertainty in establishing the relative contribution of mutation and horizontal gene transfer (HGT) to intra- and inter- species diversity in the gut.

Experimental evolution of bacteria model species colonizing the gut offers a powerful complementary approach to understand the emergence of strain diversity and its consequences for the function and structure of the gut microbiome. In this context the project team has developed a new in vivo long term experimental evolution (ivLTEE) mouse system, where the evolution of a commensal lineage within a rich ecosystem offers novel insights into the missing process of evolution within the microbiota. Using this unique experimental system together with dense time series sequencing, the researchers will characterize evolution in real time of a gut commensal throughout the adult life of laboratory mice.

Preliminary data identifies HGT as a key driver of evolutionary change in the initial stages of colonization under specific conditions. When direct competitors of a newly colonizing species reside in the gut, phage driven HGT generates new strains that acquire tens of genes from the resident microbiota. When these competitors are absent new mutations accumulate and new clones with an increased mutation rate (mutators) can emerge. Both HGT and mutation are identified as key evolutionary mechanism from comparative genomic studies. Yet, these have not only been hard to detect in real time but also their relative rates have been difficult to establish. This new ivLTEE offers exactly that possibility: quantification of the rate of long-term evolution via de novo mutation and HGT.

The spontaneous emergence and maintenance of hypermutators (rarely detected either in vitro or in vivo studies) in this complex ecosystem raises a conundrum: How can these be maintained? Will they be eliminated in the long term?; in other words: How does microbial genomic instability shape intra-species diversity in the gut ecosystem?  Both the short and the possible long term maintenance of clones with mutation rates 1000-fold higher than the typical rate can have strong effects in modulating the level of antibiotic resistance (AMR) in the gut microbiome. Not only will the level of spontaneous AMR be higher, but also it may increase to dominant levels, under antibiotic treatment. The project will also address the role of mutators in modulating AMR levels. The originality of the plan lies on its focus to characterise and quantify evolutionary change within a host lifetime, with great precision.

Dr Isabel Gordo is a principal investigator at the Gulbenkian Science Institute, Portugal. She graduated in Physics and received a PhD in Evolutionary Genetics from the University of Edinburgh in 2002. Her PostDoctoral research was carried out at the Gulbenkian Science Institute where she then became leader of the  Evolutionary Biology group in 2004. In 2010 she won an ERC Starting Grant and in 2015 a FCT Investigator Consolidator Grant.

She founded the Portuguese Society for Evolutionary Biology, has served as panel member of the European Research Council grants evaluation since 2014 and was elected an European Molecular Biology Organization member in 2017.

Her current research combines theoretical and empirical methods aiming at a better understanding of the major forces that shape diversity of bacteria and their resistance levels in the context of the gut microbiome. She uses Escherichia coli as a bacteria model and mice as a host model system. 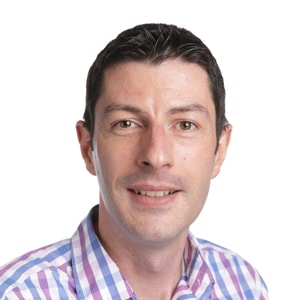 The microbiome plays a key role in health and disease and there has been considerable interest in therapeutic targeting of the microbiome as well as mining this rich resource in drug discovery efforts. However, a growing body of evidence now suggests that the gut microbiota can itself influence the actions of a range of drugs both by directly metabolising them and indirectly by affecting host drug metabolism, the consequences of which can be either beneficial or potentially harmful. Nevertheless, such studies have not extended to psychotropic medications nor addressed whether the dysbiosis associated with psychiatric illness may underpin the clinical response to psychotropic drugs.

Researchers will measure the drug-metabolising activity of the gut microbiome from patients with depression by preparing a stable cell-free extract of human faeces, fecalase. Using high performance liquid chromatography we will then determine whether fecalase from depressed subjects differentially affects the metabolism of psychotropic drugs. To better understand the impact of disease-driven dysbiosis on host drug metabolism and pharmacokinetics, in a humanised rat model of depression they will examine the expression of genes involved in host drug metabolism and the pharmacokinetic profile of psychotropic medications. Finally, through the incorporation of different types of data, including -omics, enzymatic and pharmacokinetic data in an integrated way they will develop an in silico model which can be tailored to the individual patient characteristics and provide reliable predictions of drug levels in these patients.

Dr Niall Hyland is a tenured Senior Lecturer in the Department of Physiology and Faculty in APC Microbiome Ireland at University College Cork, Ireland.  He received a BSc (Hons) in Biomedical Sciences from the University of Ulster and PhD in Pharmacology from King’s College London. Niall was a visiting fellow at the Department of Pharmacology and Experimental Therapeutics, Louisiana State University Medical Center (1998-1999) and completed an AstraZeneca/Canadian Association of Gastroenterology/Canadian Institutes of Health Research-funded postdoctoral fellowship at the University of Calgary in Canada. He returned to Ireland in 2007 to take up a GlaxoSmithKline-supported senior postdoctoral position at APC Microbiome Ireland and was subsequently appointed Lecturer in Pharmacology in the School of Medicine in 2008 and Senior Lecturer in Physiology in 2018.

Niall’s laboratory investigates the interactions between the gut microbiome and host in the context of intestinal physiology and the gut-brain axis. Current collaborative projects are investigating microbial drug metabolism; the bladder microbiome; and the temporal changes in the gut microbiome during colon carcinogenesis.  Dr Hyland has a H-Index of 22 and co-edited the book, The Gut-Brain Axis: Dietary, Probiotic, and Prebiotic Interventions on the Microbiota published by Elsevier/Academic Press.

Global Grants for Gut Health
We use cookies to help improve your experience. By continuing to browse our website you are consenting to our use of cookies.
Learn more

If you are a registered user on Global Grants for Gut Health, please sign in.

Brought to you by Nature Research, The Microbiology Awards are to reward excellence in microbiology research. Learn about the awards and enter.